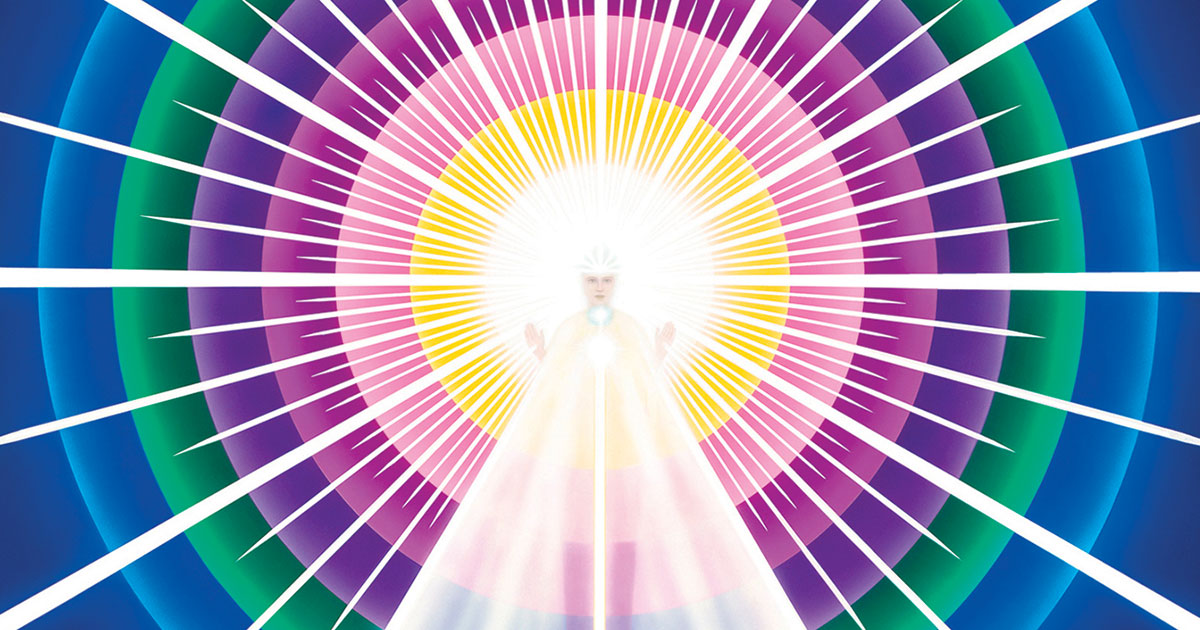 Chart of Your Divine Self

I think that the understanding of the Self is the most important understanding that the individual can have in life. If we fail to understand the nature of the Real Self, we never really quite gain an orientation or an integration in our life.

The I AM Presence

The Self begins with that which is the permanent atom of being and the cause out of which the effect proceeds. We call this cause the I AM THAT I AM, the Presence of the I AM, or the I AM Presence.

I find that God by any name can be reduced to this sense of the eternal Presence. It defines being, and I see it as a sphere of intense light that marks the point of my origin. It is the permanent part of me, of which I am very aware, and the point to which I will return at the conclusion of this life.

We have a diagram of this Real Self in relationship to the outer evolving self in the Chart of Your Divine Self. The Chart has three parts and, in a sense, could be called the trinity of our identity. First, there is the upper figure, which is a sphere of light. Then there is the lower figure, which represents the soul evolving in Matter, or in time and space.

The Divine Mediator, the Holy Christ Self

We call this Mediator the Holy Christ Self, or the Real Self. It is the Self that we are in a state of becoming through our evolution, through all of our experiences in time and space.

For example, you could see the lower figure in the Chart would be the man Jesus. The middle figure would be the Self, Jesus the Christ. And the upper figure would be the one whom Jesus called Father. We now see a relationship of Father, or the All-Father, the Son and the soul that is endowed with a flame of the Holy Spirit.

That flame is the spark of life. It is the threefold flame of life—a very real spiritual flame that is focused within the body at approximately the point of the heart. It is sealed in what is called the secret chamber of the heart.

This threefold flame endows our being with consciousness, with self-awareness, with all of the faculties that we enjoy that are above the animal kingdom. It is the sacred fire that we are to become and that we are to implement and use as our resource for living and for evolving while we are on earth.

Tracing the Life of Jesus with the I AM Presence Chart

The three figures in the Chart, which are now separate because of our limited consciousness, will one day become one. We see this in the life of Jesus. As he matures from birth to manhood, he walks more and more in the stature of his Real Self, his Christ Self.

We find him in the temple discoursing with the doctors at the age of twelve. This is a sign that the Christ Presence, or the Christ Self, is overshadowing him and he is speaking the word of that Christ.

We find him at the age of thirty in the full presence of the Christ so that his disciples recognize him as their master. He calls them away from their nets to become fishers of men. He changes the water into wine, begins to heal, to cast out demons—all this because the man Jesus has merged with the Inner Self, the Christ.

He walks the earth for three years performing not miracles but the functions of cosmic law. And then walking up Bethany’s hill with his disciples after his resurrection, he disappears from their midst and the cloud receives him out of their sight.

This cloud is the same cloud that appeared to the children of Israel. The pillar of fire and the cloud represent the I AM THAT I AM, the eternal Presence. Jesus accelerated to the level of the Christ; then Jesus, the Christ, accelerated to the level of the I AM THAT I AM. This is the nature, the true nature, of the One. And we as heirs of Christ, heirs of Jesus, have come to realize that same oneness—three out of one, one out of three.

Seeing the Trinity in the Chart

The Trinity is anchored in us in this threefold flame of power, wisdom and love. The Father represents the power of the Law, the Son is the wisdom of the Law, and the Holy Spirit is the love action of the Law.

So the Trinity exists in us as potential. Until we realize that potential, our relationship to Christ and to Father remains a separate one. And therefore, on the Chart we depict these three figures—one on earth, one higher above, and one still higher. This distance allows individuals to think in terms of heaven and earth.

The Soul and The Ascension

The lower figure represents you surrounded by a tube of light, which is released from the heart of your I AM Presence.

The lower figure is the nonpermanent aspect of being which is made permanent through the ritual of the ascension. The ascension is the process whereby the lower figure, having balanced his karma and fulfilled his divine plan (dharma), merges first with the Christ consciousness and then with the living Presence of the I AM THAT I AM.

Elizabeth Clare Prophet On the Real Self And The Violet Flame:

View more of Elizabeth Clare Prophet’s teachings on your Real Inner Self on our Summit Lighthouse YouTube channel.