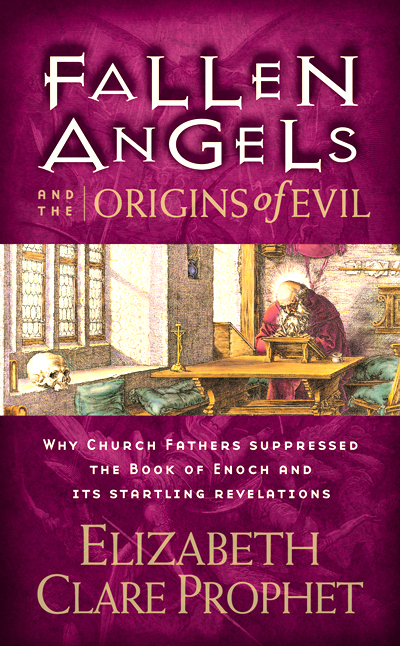 Fallen Angels and the Origins of Evil

Did fallen angels take on human bodies to fulfill their lust for the “daughters of men”? Did these rebel angels lead men astray with “divide […]

Did fallen angels take on human bodies to fulfill their lust for the “daughters of men”?

Did these rebel angels lead men astray with “divide and conquer” tactics and teach them to build weapons of war?

That is the premise of the Book of Enoch, a text cherished by the Essenes, early Jews and Christians. After the time of Jesus it was condemned by both rabbis and Church Fathers. Why?

Why was the Book of Enoch denounced, banned and destroyed? What threat did it pose? Fortunately for us, this lost book of the Bible was safely hidden for over a thousand years, waiting for an intrepid Scottish explorer to find three copies in Ethiopia in 1773.

Elizabeth Clare Prophet examines the controversy surrounding this book and sheds new light on Enoch’s forbidden mysteries – one Earth’s earliest exposes. She demonstrates that Jesus and the apostles studied the Book of Enoch with quotes from the gospel. Then she goes deep into why Church Fathers suppressed its teaching that angels could incarnate in human bodies. Looking around the world today, at all the exposures in Church and state, it is no wonder the book was suppressed!

Fallen Angels and the Origins of Evil takes you back to the primordial drama of Good and Evil, when the first hint of corruption entered a pristine world—earth.

Contains Richard Laurence’s translation of the Book of Enoch, all the other Enoch texts (including the Book of the Secrets of Enoch), and a list of biblical parallels.

History of the catholic, (not Christ’s original) church and the actions used to try to wipe the Book of Enoc from the planet.
This book shows who, how and when the book of Enoc was suppressed and almost erased from the planet. Excellent research….put this in every history book instead of current humanistic propaganda being spoon fed to our school children.

This book shows not what people have done in the name of God but what man has done to try to supress God from the people. When will mankind learn that one cannot foil God’s plans no matter how hard one tries?

Recommended for those who believe…
The book is exceptional and for me brought light and answers for some questions I had. I am not saying “right” answers because after I read it I am still in doubt who we are and from where we come. So many discussions about this subject… I started to read the Fallen Angels Among Us: What You Need to Know that adds more light in this area. Book of Enoch was taken out as other books and lost over the centuries. Decide yourselves if the Book of Enoch is good or evil and after that try to define “good” and “evil”. I think Elizabeth did a great job with this book. The other one (see above) I highly recommended for those who wants more. It seems to be exceptional as well.

Revelation 12: 7-9 – And there was war in heaven: Michael and his angels fought against the dragon; and the dragon fought and his angels, And prevailed not; neither was their place found anymore in heaven. And the great dragon was cast out, that old serpent, called the devil, and Satan, which deceiveth the whole world: he was cast out into the earth, and the angels were cast out with him.

So the book of Revelation discusses the FIRST fall of angels. This fall happened, because when God created man he asked the angels to bow down to man, whom God had created. Now, Lucifer who was the first created angel, the most beautiful angel, and the closest angel to God refused to bow down too man. That is what caused the whole war that started in Heaven.

So this FIRST fall, which cast Lucifer and his angels out of heaven, happened due to pride. These angels later on were called the “Nephilim.” Research this word on the Internet and see what you find.

And to this day, these are the angels that we fight which is spoken of in Ephesians 6:12 – For we wrestle not against flesh and blood, but against principalities, against powers, against the rulers of the darkness of this world, against spiritual wickedness in high places.

But Theology schools and ministers will only discuss this FIRST fall of angels from heaven.

Genesis 6:1-4 – And it came to pass, when men began to multiply on the face of the earth, and daughters were born unto them, That the sons of God saw the daughters of men that they were fair; and they took them wives of all which they chose. And the Lord said, My spirit shall not always strive with man, for that he also is flesh: yet his days shall be an hundred and twenty years. There were giants in the earth in those days; and also after that, when the sons of God came in unto the daughters of men, and they bare children to them, the same became mighty men which were of old, men of renown.

The above verses discuss the SECOND fall of angels, which were the sons of God, who willingly fell to earth, out of lust for the daughters of men.

Now, ministers will say that these sons of God were the sons of Seth who married these daughters of men, because these secret teachings of the church have been held back from the people due to the Early Church Fathers. they called it heretical.

What was so wrong with the daughters of men that they could not find men to marry them in their own city?

Look at the wording closely. Daughters of men and sons of God. There are two different species being discussed here. What happened to the sons of men? They would seem to go with the daughters of men. If you do research in the Bible you will discover that the sons of God are part of a heavenly host up in heaven. I will show you this in the two below scriptures:

Job 1:6 – Now there was a day when the sons of God came to present themselves before the Lord, and Satan came also among them.

These two verses mentioned above are talking of sons of God who are in the presence of the Lord. They are not average men. They are angels.

This was the SECOND fall of angels, who came to the earth willingly, out of the lust for the daughters of men. The daughters of men bore them children and their offspring wee the giants that Genesis 6:4 is talking about.

The Book of Enoch, which is included in this book also talks about the sons of God who found the daughters of men to be beautiful and took them as wives and they had their offspring. That is why the Book of Enoch was rejected, because the Early Church Fathers did not want to face up to the fact that this had happened.

This gives an even deeper meaning for the reason of the flood. It was not all due to men and their sins, although they were very corrupt back then. But God brought the flood because his angels had mated with the daughters of men and created hybrid beings. God had created man, and then these angels came down and mixed the DNA of man with theirs. You can compare this to Star Trek movies and the Prime Directive that they always refer to. That they observe other worlds and species, but they did not get involved with their world or interact with the different species. So the sons of God messed with God’s plan for man and his own divine evolution. They broke the Prime Directive. They created hybrid beings. And these son of God taught men all kinds of sin, how to make weapons, and taught them about wars, taught the woman how to find plants and dyes to make up their faces, etc. What the sons of God did was completely corrupt the daughters and the sons of men.

So God was in a dilemma. Noah and his tribes were the only righteous beings who had pure human DNA that was not of a hybrid mix. So God made the flood come so that his experiment with man and his own evolution could start all over again. Also, there was another VERY BIG IMPORTANT reason for the flood. God had to ensure that when he had his son, Jesus Christ incarnate on this earth, that there had to be a woman with 100% pure human DNA. She could not be a hybrid.

So why this may sound way out there consider this seriously and think about it. It makes you understand even more why the flood happened.

So I will try to list it very simply here:

Due to this, there is a new way to look at certain words in the Bible because of what happened.

OLD TESTAMENT:
“The wicked,” “the ungodly,” “the enemy,” “workers of iniquity,” “wicked doers,” “evildoers,” “evil men,” “wicked men”, “mighty men,” “the giant,” “sons of the giant,” “the unjust,” “pagans”, “heathen” and, on occasion, even “sinners” are referring to the WATCHERS, who were the second set of angels to fall. These wee who King David was always calling out to God in Psalms to deliver him from them.

NEW TESTAMENT
“Serpents,” “generation of vipers,” “princes of this world,” “rulers [originators] of the darkness of this world,” and the singular “Wicked One” or “Evil One” are the WATCHERS that Jesus was referring to. After the flood, some of them still survived.

When they used these epithets, the heroes of the Bible were not talking about children of the Light gone astray. No, when you read these terms you can be certain that the prophets and patriarchs, the Lord’s anointed, and Christ himself were specifically denouncing the inbred generation of the seed that was cast out and godless – the Watchers and their progeny, and the Nephilim, easily mistaken for the latter.

They knew them well – by hand-to-hand combat or the challenge of the Light and Darkness heart-to-heart. These renegades were a law unto themselves, and “every imagination of their hearts,” as God and the council of his sons would determine, “was evil” – manufacturing a synthetic society of synthetic people – continually. In fact, it was God’s judgment that the wickedness of their hearts and their works was so terrible that they must be utterly destroyed in the Flood.

I will end this from a verse taken out of “The Jerusalem Bible,” which also speaks of the Nephilim and the sons of God all being together on the earth at the same time back in that period.

Genesis 6:4 – The Nephilim were on the earth at that time (and even afterwards) when the sons of God resorted to the daughters of man, and had children by them. These are the heroes of the days gone by, the famous men.

So this is an extremely enlightening book about the two sets of different angels who fell from heaven for different reasons.

I hope you will find this information to be of interest on how evil originated here on earth. This book is well worth buying to understand what I have been trying to communicate to you.