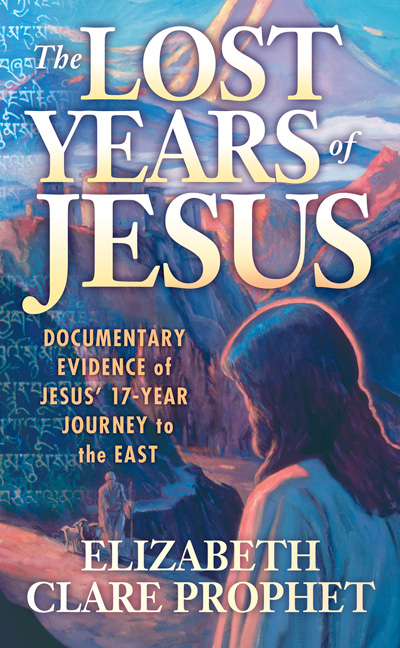 The Lost Years of Jesus

Where was Jesus during the “lost years” between ages 12 – 29? Ancient texts in a Himalayan monastery reveal that Jesus traveled to India, Nepal, […]

Where was Jesus during the “lost years” between ages 12 – 29? Ancient texts in a Himalayan monastery reveal that Jesus traveled to India, Nepal, Ladakh and Tibet as both student and teacher. Now you can find out what Jesus said and did prior to his Palestinian mission.

In The Lost Years of Jesus, Elizabeth Clare Prophet gathers four eyewitness accounts of the existence of these scrolls, plus three translations recounting those lost years. She tells the intriguing story of how Russian journalist Nicholas Notovitch discovered the manuscripts in 1887 in a monastery in Ladakh and how critics tried to use their astute opinions to disproved the scrolls existence.

Then in the 20th century, three distinguished scholars and educators independently traveling through the Himalayas rediscovered the manuscripts. With The Lost Years, you gain a greater understanding of Jesus and his mission!

This book may well change the way academia, clergy and the laity view the Son of God. Moreover, it may well set a foundation for a transcultural hermeneutic that unites the religious disciplines of East and West. Guaranteed to set off an array of theological fermentations! I heartily recommend it. – John Dependahl, Chairman of the Religion Department, Seabury Hall

Jesus lived in India for 17 years studying Hinduism and Buddhism
Canonical Gospels record the history of Jesus until he was 12 and then start again at the age of 30, but the intervening 18 years of his youth is unaccounted for. There is only one reference to Jesus’ whereabouts; Luke 2.52 says; “And Jesus increased in wisdom and stature, and in favor with God and man.” This doesn’t really say where he increased his wisdom and knowledge to preach the glory of God.

According to the history recorded by Hindu and Buddhist scholars (summarized by Notovitch in 244 verses in 14 chapters), Saint Issa (Jesus) joined a merchant caravan and arrived in Juggernaut (Puri), India where the Hindu scholars received him with open arms and taught him Sanskrit, the Vedas and the Vedic practices (Chapter 4, versus 12-14, and chapter 5, verse 4), including healing the sick and performing exorcisms (taught from Atharvaveda.) Issa spent considerable amount of time studying the metaphysical thoughts of Buddhism, and later teaching at Juggernaut, Rajagriha, Benares and other holy cities of India. His teachings stressed for equality among all men and worked for the emancipation of the poor and downtrodden.

In his later years, he went to preach in the Himalayan country of Nepal, and finally returned to Palestine at the age of 29 (chapter 9, verse 1). Issa’s teachings and raise to prominence among Jewish brethren is described in chapter 9-12. The story of crucifixion of Issa is described in chapter 13 and verse 14.1 of Notovitch’s summary. Apostle John begins his gospel, “In the beginning was the Word, and the Word was with God, and the Word was God.” These are the very words of Vedas; “Parajapatir via idam asit, Tasya vag dvitya asit, Vag vai Paramam Brahma.” Translation; in the beginning was Brahman with whom was Vak (Word), and the Word is Brahman. This clearly reflects the influence of Jesus’ Vedic knowledge on his disciples.

Buddhist monks of Tibet obtained the recorded the history of Issa from India via Nepal (chapter 4, versus 11-13). The original was in Pali, the language of Buddhists which was then translated into Tibetan. The history was documented 2000 years ago and copies of these documents were found in Himis monastery in Ladakh. In 1889 Nicolas Notovitch, a Russian historian studied and summarized them at Himis. Later in 1929, Swami Abhedananda of the Ramakrishna Order reviewed and verified the authenticity of the apocrypha by personally studying them at Himis monastery. Later Nicholas Roerich and Elisabeth Caspari confirmed the existence of these documents during their visits to the Buddhist monastery at Himis.

The documents at Himis contained 244 verses that were arranged in 14 chapters that describe the life and acts of saint Issa in India. The author summarize this at the end of chapter 2, page 212. According to these verses, Issa traveled to India to study the Vedas and Buddhist scriptures. The book also contains several pictures of the picturesque Himalayan Mountains taken by historian Notovitch and other visitors, and a historical map showing the journey of Issa to India and Nepal. – Rama Rao